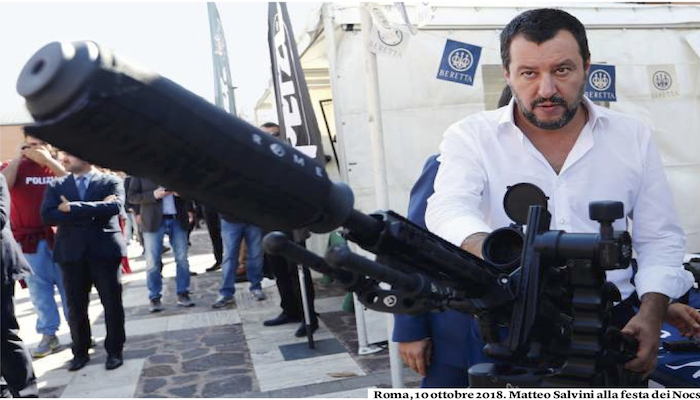 ROME — At a police convention in October, Matteo Salvini, the most powerful figure in Italy’s populist government, ran his hands over an enormous military-grade sniper rifle and posed with a submachine gun. Before elections this year, he campaigned at a gun show and signed a cooperation pledge with a group advocating looser gun laws in Italy.

Italian culture, linked in the popular imagination with fine art, fashion and good food, does not typically conjure up the image of assault weapons. But in September, the government loosened gun laws, making it possible to own more guns like the AR-15, an assault rifle that has been used in numerous mass shootings in the United States, most recently a Pennsylvania synagogue where 11 were killed.

Opponents of Mr. Salvini wonder why he would want to import the freewheeling gun culture so associated with the United States, which is far and away the developed world’s leader in mass shootings and other gun-related violence. The easy answer seems to be politics…

Gun control advocates disputed that interpretation and said that the government was needlessly endangering public safety.

“I’m convinced there was already an agreement between these associations and the government, and particularly the Northern League,” said Giorgio Beretta, a researcher who tracks gun violence in Italy, referring to Mr. Salvini’s party by a previous name.

It is already too easy to get a weapon in Italy, said Mr. Beretta, who only coincidentally shares the name of a major Italian gun manufacturer.

There is no official data available on how many crimes in Italy are committed with registered, as opposed to illegal, firearms, but some high-profile attacks have made the news.

In February, a right-wing extremist named Luca Traini went on a shooting rampage in the town of Macerata, targeting migrants with a Glock handgun. It was later reported that Mr. Traini had a gun license for sport shooting.

The easing of gun control laws, and the efforts to expand the definition of self-defense, are alarming to Italians who see Mr. Salvini’s emphasis on security issues not as a step toward a safer country, but as a slippery slope toward a more dangerous place.

Francesco Minisci, the president of Italy’s national association of magistrates, said in an interview that the self-defense change was unnecessary and dangerous, and could lead indirectly to an increase in gun use.