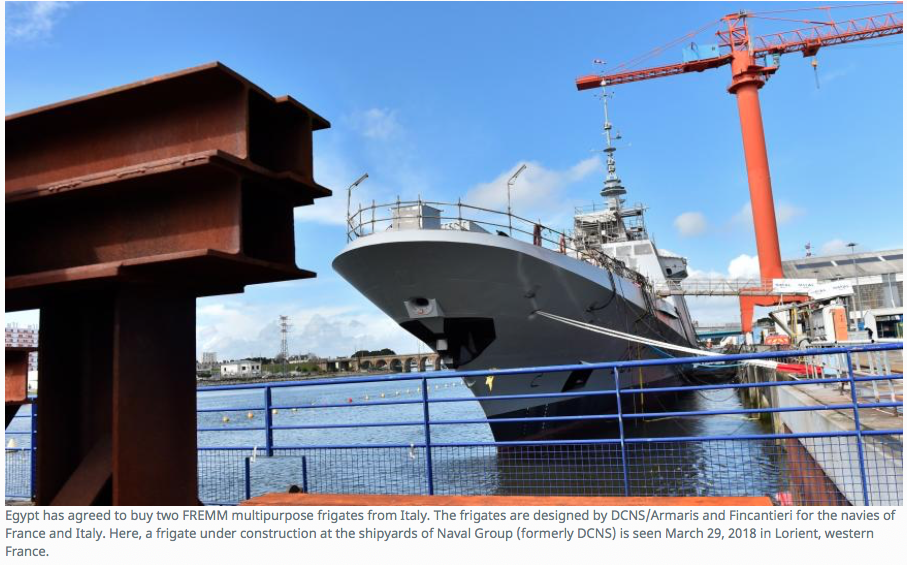 A correspondent in Egypt – Fonte: © AL-Monitor
march 27, 2021
As Egypt becomes one of the world’s largest importers of arms, Italy is seeking to sign additional arms deals with the North African country despite sour bilateral relations in light of Egypt’s human rights record.

It seems Italy has insisted on carrying on with arms deals with Egypt despite the tensions that have marked their bilateral relations following the 2016 death of Italian student Giulio Regeni in Cairo.

The Stockholm International Peace Research Institute, which monitors the world’s arms transfers, said March 15 that in 2020 Egypt had received 25 of 50 Aster-15 missiles ordered as part of an arms deal with Italy.

The Aster-15 is a medium-range vertically launched surface-to-air missile designed to offer defense for warships. This type of missile is used on FREMM frigates.

Giorgio Beretta, an analyst for the Permanent Observatory on Small Arms, Security, and Defense Policies based in Brescia in Italy, told Al-Monitor that the missile deal is part of a larger agreement on the sale of two Bergamini-class FREMM frigates that the Italian government gave the green light to in August.

Beretta said, “There is no available information on the value of the missile deal. The next government report on arms exports before the end of the first quarter of 2021 will provide information in this regard.”

The first FREMM Bergamini frigate — which was manufactured by the Italian state-owned shipbuilding company, Fincantieri — was delivered to Egypt in December. The Egyptian navy received the frigate, called al-Galala, at the Alexandria Naval Base.

Italy is to deliver the second frigate to Egypt before the end of 2021. The deal for the two vessels deal is estimated at 1.2 billion euros ($1.3 billion).

The deal was met with wide opposition among rights groups and parliamentarians who tried to block it, but to no avail. Regeni’s parents said June 8 that they felt betrayed by the Italian government’s plan to sell warships to Cairo as they accuse Egyptian security forces of being behind their son’s death. In January, they filed a complaint against the Italian government for completing the deal with Egypt.

Beretta said it is unacceptable to deliver to Egypt weapons and military equipment as it contradicts Italian laws regulating arms exports. Beretta — as well as the complaints Regeni’s parents filed — invoked Law No. 185 of 1990, which prohibits the sale of arms to countries whose governments are responsible for serious violations of international conventions on human rights.

Beretta noted that striking military deals with Egypt without taking into account opposing voices does not honor the memory of Regeni or the detained rights advocates and civil society activists in Egypt.